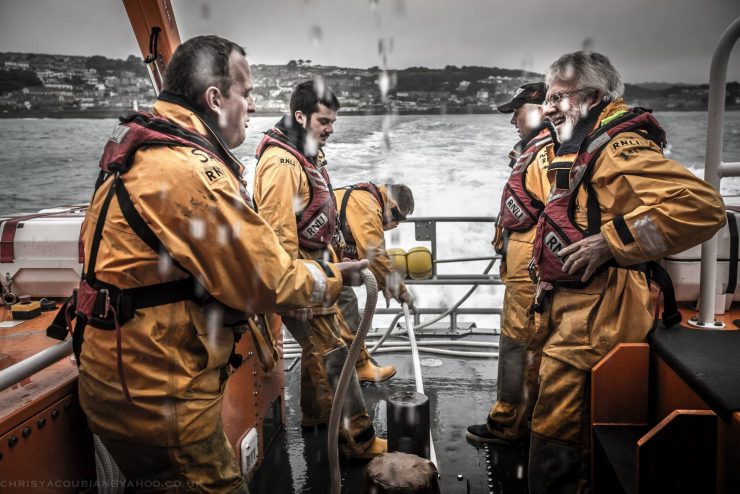 What do you think of when you think of chaplains? Gentle clerics treading apologetically round hospitals, speaking in hushed tones with ever-ready platitudes, tissues and a church invite? Maybe on the TV, but not in Cornwall. Here, the role of the chaplain is robust, frontline and diverse.

A study of chaplaincy in Cornwall in 2017 undertaken by THEOS, a religious and society think tank, revealed, “A picture of a vibrant and extensive chaplaincy scene.” It showed that Cornwall has chaplains covering almost every area of life within our county, from the sea to the land, teaching to governance, emergency services to hospices and the forces to the theatre. In total, there were over 200 reported pieces of chaplaincy work in over 116 institutions or organisations in Cornwall. And that doesn’t allow for the chaplains that the research didn’t reach.

At a time in our county when our clergy are taking on multiple churches under ever increasing benefices, traditional clergy pastoring is under pressure. And that’s where chaplains can play such a vital role. They are uniquely placed, on the ground, out where people live, work, study and even die. Chaplains fulfil Jesus command to, ‘Go’. Jesus was always telling his disciples to go – “Go and make disciples…” (Matthew 20: 19); “Go and do likewise.” (as the Good Samaritan, Luke 10:37).

Canon Chris Batt has taken this message to heart. Chris has the very official sounding title of Bishop of Truro’s Officer for Rural Affairs, “They only gave me the title because I have trouble rolling my ‘R’s” he laughs. 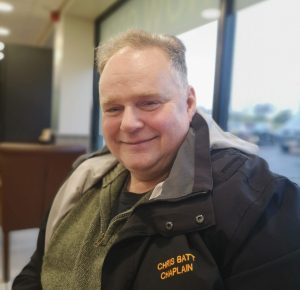 Canon Chris Batt, Bishop of Truro’s Officer for Rural Affairs, who laughs, “They only gave me the title because I have trouble rolling my ‘R’s!”

To most people, he’s a chaplain to the rural farming communities. He has a difficult job. The farming community is finding life particularly hard, not just with the post Brexit uncertainty, the pressure to drive prices down, the changing weather patterns and the high level of paperwork that they have to contend with, but also the changing perception of the industry. With the rise in veganism and the subsequent demonisation of the farming industry, it’s a perfect storm, unless you’re caught up in it.

It’s a startling fact that more than one farmer a week dies by suicide in the UK. “Farmers are under siege and the nature of their work and life style often means they have few people to share a pint with, never mind their worries,” says Chris. Which is where he comes in. Chris connects with farmers at the markets, over the kitchen table, and out in the fields. The community trust him and let him know if anyone drops of the radar. If they do, he’s on it. “I’m often out and about, so it’s relatively easy to drop in, or appear to. Because I have built up a relationship with the farmers, can talk about football and their families as well as the intricacies of agricultural feed or farming compliance, they can talk to me about their worries.”

“Farmers are under siege and the nature of their work and life style often means they have few people to share a pint with, never mind their worries,” says Canon Chris Batt.

Chaplains are not evangelists, “My job is to go and spread the Gospel, and if that doesn’t work, use words!” jokes Chris. Nor are they fixers. What they are really good at is listening, listening to people and to God. One time he was camping on the edge of Loch Lomond and took a desperate call from a farmer in the early hours. Chris couldn’t fix the problem, but he silently prayed and listened and by the time the call ended as the sun came up, the farmer knew he had been heard. He later said the call had saved his life.

“My job is to go and spread the Gospel, and if that doesn’t work, use words!”

Chaplaincy on the frontline, taking church out of church buildings

Chaplaincy takes church outside of church buildings. It isn’t about increasing numbers in a parish but going out, as Jesus commanded, and sharing God’s love. It’s very practical, relying on an ability to make connections and a willingness to go to places that can be very difficult to navigate. As the THEOS report revealed, almost 90% of chaplains pitch up voluntarily, turning out in all weathers and circumstances. Think of Street Pastors. Not many of us would volunteer to walk the streets of our local towns and cities to hand out water, flip flops or offer of a mobile phone to call a taxi. Yet that is where people are and where Jesus would be, out on the streets, late at night, offering compassion, care and practicality. 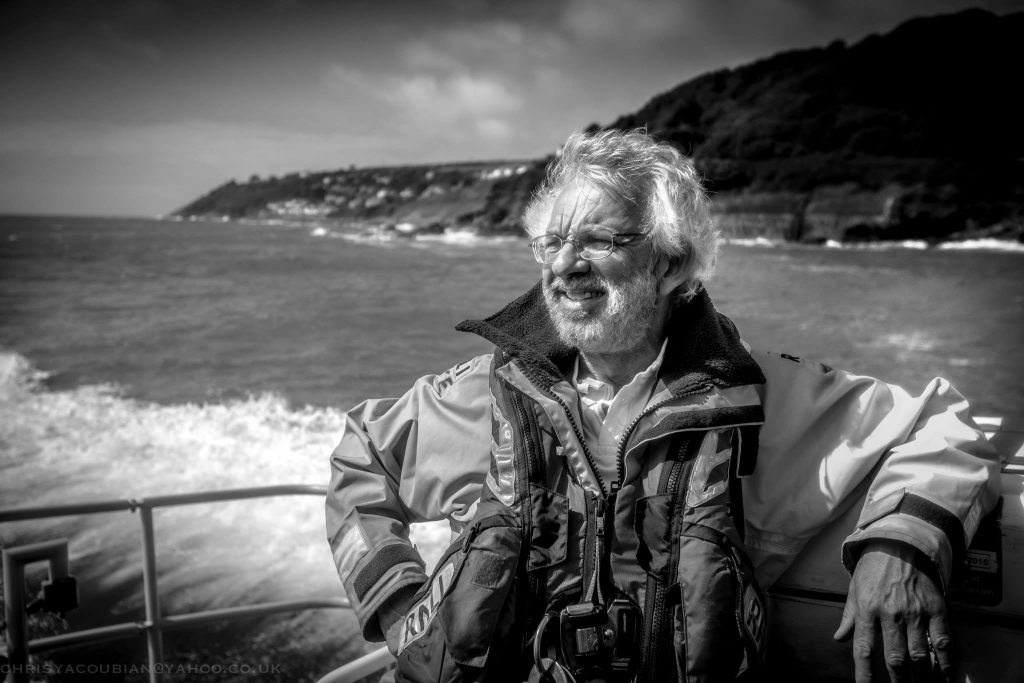 We also have chaplains to the emergency services – could there be a role that’s more frontline? The wonderful, but sadly late Revd Julyan Drew, who died last year, was chaplain to the RNLI in Penlee and the Cornwall Fire and Rescue Service. When asked why he took on the role, he said, “It puts me alongside people who fulfil the love and service Jesus talks about, it’s love in action every time they respond to a shout. It’s a great privilege to be treated as one of the team, although thankfully I’m not expected to put out fires or rescue stricken vessels!”

“It puts me alongside people who fulfil the love and service Jesus talks about, it’s love in action every time they respond to a shout…” the late Revd Julyan Drew

The bravery, wisdom and discernment of hospital chaplains

And what of those hospital chaplains? Do they really lurk around in hospital corridors? Revd Dom Whitting, who currently works in the role at the Royal Cornwall Hospital in Truro, couldn’t be further from a lurker! “It can be very tough, as a chaplain you’re not just here for the patients and their visitors, but the staff too. You often see people at the worst time in their lives, or, in the case of staff, helping people through such a moment, possibly for the second or third time that week or even day.” It requires bravery, wisdom and discernment to be a hospital chaplain, to know when to speak and when to be quiet. 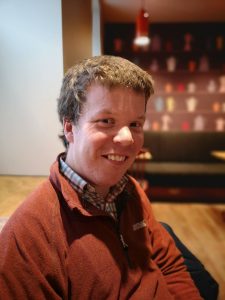 Dom lives with Cerebral Palsy and says that part of the pull towards chaplaincy for the NHS was the opportunity to give something back. He first tried chaplaincy during a placement, but there were no positions available. So, he became part of the chaplaincy bank, taking shifts as and when they came in. He loved it so much and felt so strongly pulled, he took a leap of faith with his wife and gave up parish work, waiting for the role of hospital chaplain to grow. And it did, first one day a week, then two, then three. At the end of last year Dom was offered a permanent post on the team. So why take such a risk?

“From the early days I knew I wanted to do chaplaincy, and when I tried it, I just loved it. It was like coming home.” Dom says that although there often isn’t the continuity of extended relationships, the time that is spent with people in the hospital setting is incredibly valuable. “It’s important and meaningful and can change their whole outlook. It really makes a difference.”

““From the early days I knew I wanted to do chaplaincy, and when I tried it, I just loved it. It was like coming home.”

For Dom, being a hospital chaplain fulfils his call to pastoring in a way that being a parish minister didn’t. “During training, I was told parish ministry involved being three things, preacher, pastor and administrator (and you probably won’t be good at all three).  One will probably be your default, pushing you on in ministry. For me, it’s being a pastor.”

“Many succeed at all three, or are skilled delegators and team builders, but, for me, parish life meant I couldn’t be the type of pastor I wanted to be. There were so many demands on my time – buildings, meetings, politics – and the pastor bit kept getting pushed away.”

The sacred thin space where God is very present

Chaplaincy is all about pastoring and as Chris said, listening. Dom echoed that when he shared a story about a family gathered around their mother after she had died in hospital. He’d been told one of the daughters needed support. She was very upset and asked Dom to pray with her, over her mother. As they prayed, Dom had a very clear picture of footsteps on a beach. “I’m not the sort of person who usually has visions and pictures and wasn’t sure if I should share it.”

But Dom felt he should, so he asked the daughter if the Footprints in the Sand poem meant anything. She told him she carried a copy of it in her purse. “I was amazed, I told her I had a sense that God wanted her to know that He was carrying her through this time. It was such a thin space, God felt very present, using that short period of time in such an incredible way.”

Raising up and championing chaplains

Dom, Chris and all the other chaplains across Cornwall, are fulfilling essential roles in our society. Reaching out to the lonely, befriending, making themselves available and listening. They work with clergy, complimenting the amazing work that they do in their parishes, and would love it to be more widely known that they are here, boots on the ground, ready to be sent. “We can never replace the parish priest,” says Dom, “Nor can we pass on the information we hear as chaplains, but we can hold that space. We would love to be used more by parishes – we are available from 8am to 4pm on weekdays and operate an emergency on call service out of hours.”

For Chris, rural chaplaincy is a bridge-end between the rural community and churches. “I’d love to see the role championed and raised up – not everyone is called to be ordained or as a lay reader or preacher. In my experience, most people want to do something – they just need to be asked. And what better way to do something than in that very special and privileged place where people who could be struggling will accept an authentic offer of help.”

Chaplains are indeed amazing. They have understood Jesus command to ‘Go’, coming alongside people, wherever they are and however they are. Across a crowded cattle market, out on a lifeboat or in the rooms and corridors of hospitals, in that very thin space where God is just waiting to break through.

Diocese of Truro @DioTruro
Job Alert: We are looking for a proactive and skilled Local Worship Leader Coordinator to coordinate the delivery o… twitter.com/i/web/status/1…
About 8 hours ago
ReplyRetweetFavourite