Room at the inn – in a former parsonage 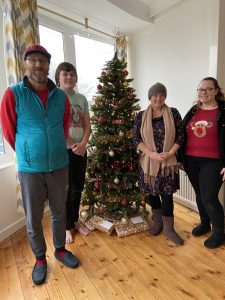 This Christmas a former parsonage in the Diocese of Truro will have a new lease of life – as  home to six people who are clients of homelessness charity St Petrocs.

The residents of the house in Eliot Gardens, Newquay, have all come from other St Petrocs properties, and are hopefully all on the road to being able to live independently.

Ian Young was the second person to move into the house, when it opened in September. At one point Ian had been sleeping on a park bench in Newquay in the winter, and he became very ill and needed a prolonged stay in hospital. But when it came time for him to be discharged, he had nowhere to go. And that’s where St Petrocs stepped in.

“Being able to live here in a safe home means the world to me,” said Ian.

“It’s a beautiful house in a beautiful neighbourhood. I’ve got a really nice room with a lovely armchair that I can sit in. I feel very safe here, and that’s a huge thing.”

At the age of 21, Callum Stephenson found himself with nowhere to call home. He had enough money to stay in a hotel for two nights and was then faced with the prospect of sleeping on the streets.  But a friend of his introduced him to St Petrocs, and they were able to put him in one of their ‘emergency’ beds that they keep for use under the No Second Night Out scheme.

Callum is now about to take the step of moving away from St Petrocs and out into a shared house – although the charity will still provide him with help and support as he wants.

“It stopped me from being totally homeless and that was great because I really had nowhere to go. But now I feel I don’t need to be here and I’m taking a place that someone else could really use, so I am looking forward to moving on,” said Callum.

Every day one of the charity’s property managers calls to the house. Sometimes it’s for a cuppa and a chat with the residents to check all is well. At other times there may be people who need particular help with something.  But the residents of Eliot Gardens need a low level of support.

The home benefits from a daily food collection from Marks & Spencer at Fraddon under the auspices of the charity Neighbourly.

Initially some of the neighbours living in the streets around the house had expressed concerns, but outgoing property manager Susan McKnight who has been at Eliot Gardens since it opened, said: “It’s all settled down now and we have good relationships with the neighbours. Lots of people have been lovely and welcoming, and we do our very best to make sure we are good neighbours.”

Diocesan Secretary Esther Pollard said: “It is so good to see the house being used successfully to provide a secure home for people who for various reasons have found themselves with nowhere to live. Especially at Christmas, it feels like a good thing for us to be providing some ‘room at the inn’.”

Could you help St Petrocs? The charity is always looking for people who would like to help. Volunteering could take the form of doing something specific, like gardening, or other professional services, for example. But it could be as straightforward as regularly calling in and offering community and friendship to people.

There are usually plenty of volunteers at Christmas, and while everybody is grateful for that, what the charity could really do with is people coming forward during January and February – once Christmas is but a memory, but the temperatures are still cold outside.

If you would like to offer your time or services, please email: home@stpetrocs.org.uk

Diocese of Truro @DioTruro
In the studio with @BBCDonnaB, @pmounstephen and our next Bishop of St Germans, Revd Hugh Nelson recording for Donn… twitter.com/i/web/status/1…
16:23, Fri
ReplyRetweetFavourite