The Mystery of the Millennium Yews 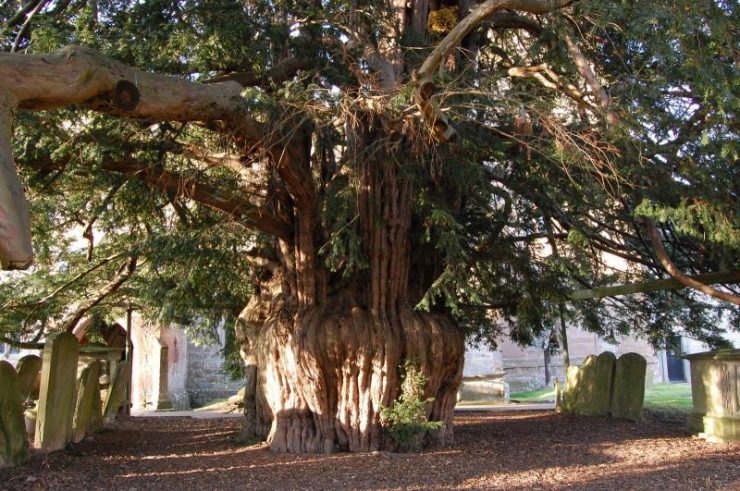 Millennium yew cuttings taken from trees at the time of Christ were blessed and sent to Cornwall but where are they today? A recent article in the Church Times about the Millennium Yew Tree Project, launched by the then Bishop of London towards the close of the century, prompted the question, “What happened to Cornwall’s Millennium Yews?”

The project was designed to revitalise the yew to become symbols of community and signs of creation. At the time the population of yews was diminishing, so the plan was to plant a yew in every parish that wanted one. The yews, considered symbols of regeneration, were cuttings taken from ancient yews from the time of Christ. This created a living link to Jesus and encouraged people that if these yews were to live on for another 2000 years, we would need to care for and cherish our local environment. They were blessed during a distribution service at St Paul’s Cathedral and sent out across the UK to plant hope for greater sustainability and care of our planet.

Millennium yews transported unceremoniously in the back of a car

The uptake of the offer took the organisers, Conservation Foundation, by surprise. Everyone wanted one! And that included us down here in Cornwall. There was a limited budget, so the cuttings that came to us were particularly small as they had to fit in the back of a car! Nevertheless, services were held for the revered yews and they were duly planted – but where?

Do you know what happened to them? Is there a Millennium Yew planted in your church?

The fascination of yews

Yews, or Taxus baccata, are fascinating trees. Commonly found in churchyards they are shrouded in myth and mystery. Although older than many of the graveyards they are found in, some say they were planted so their roots would grow deep into the dead and pin them down to stop them escaping. Others say they were planted in graveyards to stop opportunist farmers letting their cattle gorge on the grass – as yews are poisonous.

It’s also said that yews, many of which are thousands of years old and pre-date the churchyards they are found in, were originally planted for Celtic and Druid rituals. When the Romans came along, they were told not to destroy the pagan sites, so instead they buried their dead amongst the yews, creating the first graveyards. The oldest yew in Britain, the Fortingall Yew, is estimated to be between 2000 and 3000 years old.

Yews, despite being poisonous, are known to have healing qualities. Their leaves are used medically in the treatment of some cancers (yet eating 50 leaves is enough to kill a man). The berries, so it is said, are delicious, the sweetest of English fruits. But be aware of the black pips cradled inside – just two can kill a horse. Historically used for bows and arrows, the wood of a yew tree has been used as a weapon of war throughout the centuries, the fumes from burning yews said to poison and thwart invaders.

Millennium yews as symbols of life and regeneration

More hopeful perhaps is the belief that yews are trees of life and regeneration. When a branch grows to meet the ground, it roots itself to create a new tree. Many of the trees have survived so long, it is believed, because fungus, particularly the Chicken of the Woods, eat the tree from the inside. Creating a hollow trunk, this enables the tree to better withstand the winds.

Do you have a Millennium Yew in your parish?

So, have these Millennium Yews planted in Cornwall been robust enough to survive our ferocious winds? Do you have one planted in your parish? Can you help us find them? It would be lovely to know that those cuttings taken from trees planted at the time of Jesus’ birth have taken root in Cornwall and are flourishing today.

It would be lovely to know that those cuttings taken from trees planted at the time of Jesus birth have taken root in Cornwall and are flourishing today.

If you have any information about the Millennium Yews in Cornwall please get in touch by email or give us a call: 01872 274351